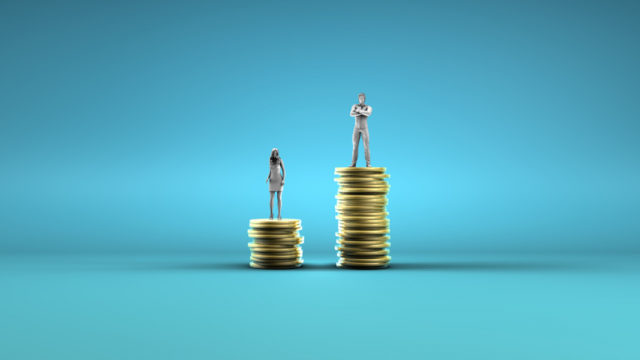 The government’s legislated income tax cuts will disproportionately help rich men and leave women further behind during the recovery from the coronavirus pandemic, new modelling has revealed.

Treasurer Josh Frydenberg said the government was “considering the timing” of income tax cuts scheduled for 2022 and 2024 – hinting they may be fast-tracked to help the economy recover from the worst recession in almost 90 years.

This month’s national accounts revealed GDP fell by seven per cent in the September quarter, with consumer spending falling off a cliff as nervous households boost their savings.

The Coalition is being encouraged by many economists to pour money into public infrastructure projects to create jobs.

But the Morrison government has $160 billion in tax cuts for higher-income earners scheduled for 2022, with business groups calling for the ‘stage two’ cuts to be brought forward as early as the October federal budget.

On Wednesday, the institute followed up that research with new modelling showing that men would receive more than twice the benefit of tax cuts than women.

“Giving tax cuts to the wealthy will have a very limited stimulatory effect on the broader economy, but it will significantly widen the economic divide that already exists between men and women in this country,” TAI senior economist Matt Grudnoff said.

This flattening of the tax rates has been criticised by economists for winding back the progressive nature of the system.

The TAI modelling claims to show that for every dollar of benefit that women would get from stage-two tax cuts, men would get $2.28.

If stage two and three were brought forward, men would get $2.19 for every $1 of benefit that women would enjoy.

Mr Grudnoff said this was due to systemic discrepancies in the types of jobs that men and women typically work, and the pay those jobs attract.

“Men typically have an advantage because they typically take on less caring responsibilities. Women look after kids and ageing parents more, take breaks in employment, go part-time, and that affects the ability to be promoted and also affects lifetime earnings,” he told The New Daily.

“Historically, the types of jobs women go into are not as well paid as the jobs men go into. That’s often around aged care, health care or teaching. We haven’t valued those industries as highly as some others, despite how terribly important they are, which this pandemic has exposed. Typically, those jobs have lower incomes.”

Mr Grudnoff said the gender disparities on the tax cut benefits would further exacerbate the already unequal effects of the pandemic.

He pointed to labour force data that showed total employment in March and April fell 3.9 per cent for men and 5.3 per cent for women.

“Despite women facing a bigger impact from the COVID-19 recession, government stimulus has focused heavily on male-dominated industries such as construction,” he said.

“Giving tax cuts to the wealthy will have a very limited stimulatory effect on the broader economy, but it will significantly widen the economic divide that already exists between men and women in this country.”

Senator Larissa Waters, the Greens party’s spokesperson for women, said the modelling showed the government had been “ignoring the structural inequalities facing women”.

“Tax cuts that deliver twice as much for men as women entrench the gender pay gap and won’t secure a fair and sustainable recovery,” she told The New Daily.

“Women have been on the front line of our coronavirus response as healthcare professionals, teachers, childcare teachers, disability carers, and aged-care workers. This report confirms that these tax cuts won’t help those women.”

Senator Waters said the government should be looking at “child care, fair pay, secure jobs and flexible working conditions” instead of backing in more tax cuts.

“Not only is this government’s attitude stuck in the 1950s, so are its ideas. Cutting taxes, digging holes and building roads are tired responses that don’t work as economic stimulus in 2020,” she said.

Other economists told The New Daily that increasing government spending in critical areas like infrastructure and health would deliver a greater economic benefit than tax cuts.

“Investing in employment-intensive industries like health care, aged care and education will be more efficient than bringing forward the tax cuts, creating more jobs for every million dollars of stimulus,” he said.

“These industries also employ large numbers of Australian women who have been disproportionately affected by the COVID-19 recession.”

The federal budget is scheduled for October 6.

← Provide your feedback on the draft Disability Access and Inclusion Plan Victoria Police ‘act with impunity because there are no consequences’, legal expert says →