Victoria Police ‘act with impunity because there are no consequences’, legal expert says

Victoria Police ‘act with impunity because there are no consequences’, legal expert says 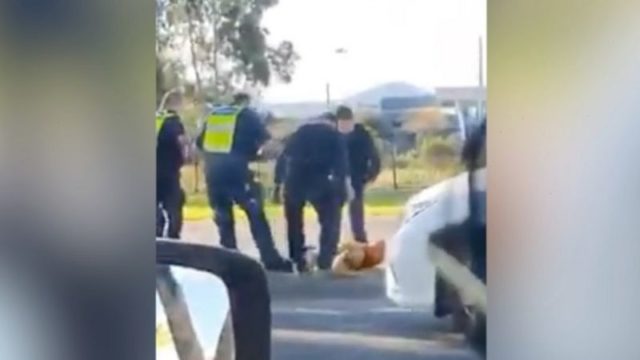 The lack of an independent body with powers to investigate Victoria Police misconduct is fostering a culture ‘‘of acting with impunity’’, legal advocates warn.

It comes after the state’s anti-corruption watchdog announced it would investigate Sunday’s violent arrest of a mentally ill man at Epping.

But the Police Accountability Project run by the Flemington & Kensington Community Legal Centre says the investigation will do little to combat a growing culture of ‘‘officers acting without consequence’’.

For Victoria to avoid ending up like the United States, the state needs a watchdog with broad powers, the group said.

Video of the violent arrest was posted on social media and led to widespread condemnation.

The footage includes a moment when one of the officers appeared to stomp on the man’s head as he lay on the ground.

Concerns over excessive force were compounded on Tuesday after police shot a mentally-unwell man who was brandishing a knife outside a shopping centre at Lilydale. The man is recovering in hospital.

When speaking about the Epping arrest at a press conference on Tuesday, Deputy Commissioner Neil Paterson said there had been “inappropriate use of force by a police member with regard to the kick or the stomp to the head of the man involved in that incident”.

“I’ve also formed the view that the use of force in using a police vehicle with the man involved in that incident is concerning,” he said.

The officer accused of stomping was suspended with full pay, and another officer has been disqualified from driving a police car.

“Using a kicking action or any action against the head of a person is not trained by Victoria Police. That is outside of our accepted training within Victoria Police,” he said.

But principal lawyer at the Police Accountability Project Gregor Husper said he feared IBAC l do little to hold the officers to account.

“When IBAC do investigate on police matters they are largely reliant on the investigation the police do,” he told The New Daily.

“They don’t have a big enough team of investigators. They haven’t got enough money. Really it’s an oversight role.”

He said Victoria needed an independently funded, transparent watchdog that centred around victims.

“At the moment we don’t have one. Successive governments have been reluctant to do it because they depend upon the police.”

Concerns over IBAC’s ability to fully deal with allegations of police misconduct have been growing for years.

In July this year commissioner Robert Redlich, QC, said the watchdog did not have enough money to do its job.

“The ability of IBAC to meet the growing demands and expectations of Parliament and the people of Victoria depends upon the resources, as well as powers, at our disposal,” he wrote in IBAC’s quarterly update.

And in November last year, Mr Redlich asked Premier Daniel Andrews’  government to beef up its powers to investigate and review police conduct.

Only about two per cent of misconduct cases make it to IBAC, with most being investigated by the police.

Of those that are internally investigated only a handful are substantiated, Mr Husper said.

“The statistics show only nine per cent are substantiated and, of course, that doesn’t mean officers are even charged, it might not even be an apology.

“So no, the public has no confidence in it.”

Mr Husper said Victorians would continue to see incidents if there was ‘‘not enough health providers and too many police acting with impunity’’.

“If you want to see impunity out of control, that’s the US. In a small scale that’s what happens here. Police know there are no consequences.

“Police know that even with footage the police force and the union will typically back them.”

The Police Association of Victoria did not return requests for comment before deadline.

The post Victoria Police ‘act with impunity because there are no consequences’, legal expert says appeared first on The New Daily.