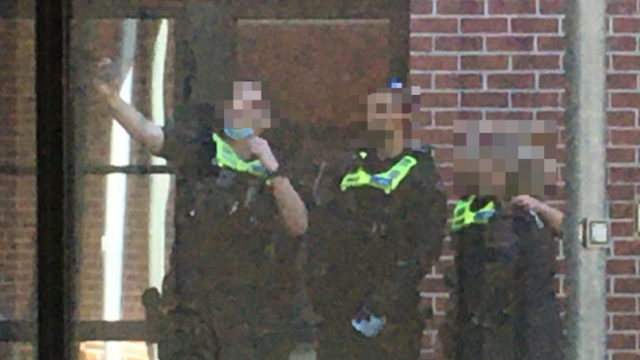 Victoria Police officers without masks have been captured on camera hugging a citizen for a series of selfies in a public place and ignoring mandated social distancing rules, but police say they cannot investigate.

Images provided to The New Daily show three officers taking selfies with a woman in a community space in Melbourne’s north on Tuesday morning.

The photos were taken in a suburb currently under strict Stage 4 restrictions.

All Melburnians, including law enforcement, are required to wear a face covering when they leave home after the new restrictions came into effect on August 3.

However, Victoria Police say it is unable to follow the matter up.

The New Daily shared the suburb where the photos were taken along with the time but could not give the exact location for confidentiality reasons.

“For deliberate and blatant breaches when people refuse to wear a face covering, Victoria Police has no hesitation in issuing $200 fines.”

“If someone genuinely forgets their face covering or has taken it off for a short break, police often execute discretion and issue a warning.”

Victoria Police also declined to reveal the number of fines it had handed out for Melburnians not wearing masks since the rules came into effect on August 3.

“While Victoria Police releases provisional statistics on a daily basis given the public interest in the enforcement of Chief Health Officer (CHO) directions, official data is released by the Crime Statistics Agency,” a Victoria Police spokesperson said.

“CSA is scheduled to release the latest 12-month crime statistics up until 30 June 2020 next Thursday 24 September, which will include data on the number of CHO related fines issued.”

When the whole country went into lockdown in late March, Victoria imposed some of the strictest penalties for public health breaches.

There were more than $10 million worth of fines handed out in Victoria between the end of March and May.

Officers breaking regulations they are entrusted to enforce sends the message there is one rule for the public and another for police, said Dr Patrick Emerton from the Faculty of Law at Monash University.

“Australia is a rule of law country, the government has to follow the same law as everyone else, and that includes the police,” Dr Emerton said.

“If the police have an operational reason as to why they’re not wearing masks, you want them to be clear about it so people understand it,” he added.

“Otherwise, it looks like one rule for the police and one rule for everyone else and that undermines confidence in the democratic process.”

Earlier Wednesday, the State Government announced it would crack down on regional travel with a new $4957 fine for Melburnians from metropolitan areas who are caught trying to move to the regions.

Pubs, cafes, hair salons and caravan parks will be reopening in regional Victoria on Wednesday and there will no longer be restrictions on people leaving their homes.

Deputy Commissioner Nugent said there would be a large police presence patrolling the exits out of the city.

“We do not want regional and rural communities to be put at risk by Melbourne metropolitan people,” he said.

“We don’t want the virus to spread again in these rural areas, we want to maintain the restrictions and continue to ease them.”

The state’s anti-corruption watchdog, IBAC, will investigate two officers involved in the arrest of a man at Epping on Sunday.

The man was left in a coma after video footage showed him being hit with a car before one officer appeared to stomp on his head.

Two officers will be criminally investigated.

On Tuesday, a mentally-unwell man brandishing a knife outside a shopping centre at Lilydale was shot by police.

The man is recovering in hospital.