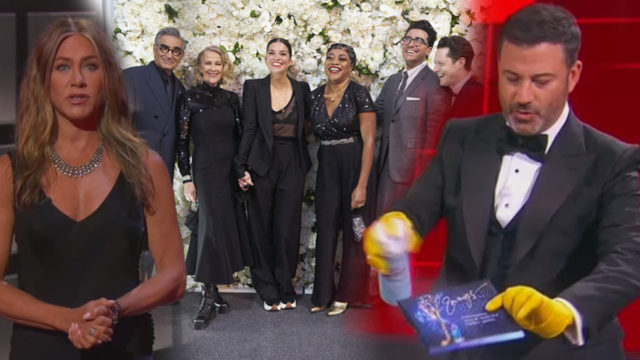 The 72nd Annual Primetime Emmy Awards are all wrapped up, but you may have caught it by its alternate name, The Schitt’s Creek Awards Show.

The Canadian comedy show was the foul-mouthed darling of the awards, sweeping seven awards for its sixth and final season – despite never having won before.

This year’s nominees were deprived of their red carpet and stage walk experiences, and instead video conferenced in from all over the world, with each award being delivered their home or hotel.

Joining the celebrity presenters this year were a number of everyday American essential workers, including a teacher, a mailman and a truck driver who encouraged viewers to stay home and stay safe in the wake of the pandemic.

Guest presenters and nominees didn’t dance around the elephant in the room either, with sanitised envelopes, Zoom gags and even a live on-air coronavirus test for Sudeikes making the cut.

And although the video conferencing took away much of the atmosphere and fervour of a live awards show, it did provide some silver linings.

This year’s comedy skits and segments were more outlandish than previous years, with Aniston and Kimmel extinguishing a fire live on-air, and a real-life alpaca presenting in place of Al Pacino with Fresh off the Boat’s Randall Park.

A sketch showing celebrities enduring life in lockdown included lots of drinking, a cry for help in the form of embroidery by comedian Mindy Kaling, and an impression of Tiger King’s Joe Exotic by David Spade.

When @jimmykimmel asks you how you’ve been doing in quarantine… pic.twitter.com/gUoxMBXeYa

The real comedy winner this year was Schitt’s Creek, which made up for years of Emmy snobs by going on to dominate in its final season.

Taking out every award in the comedy section, including wins for all four main and supporting cast members, Catherine O’Hara, Annie Murphy, Dan Levy and Eugene Levy, the series also snatched up a further three wins for outstanding writing, directing and outstanding comedy series.

Aptly nicknamed ‘Schitt’s Sweep’, the brainchild of the Levy father/son duo became the first comedy or drama series in Emmys history to sweep its entire category.

The series also won two awards for casting and costumes at the Creative Arts Emmys, bringing its total number of wins to nine.

With Catherine O’Hara, Eugene Levy, Dan Levy and Annie Murphy winning their #Emmys tonight, that means our little Canadian show is the first comedy OR drama to ~ever~ sweep all four acting categories, and that is absolutely wild 🇨🇦 pic.twitter.com/fEUnaLoDBr

But it was HBO’s Watchmen that won the most awards for the year, claiming 11 wins for its first season and ensuring HBO beat out other networks with a total of 30 wins.

And the vigilante, crime-fighter series wasn’t the only HBO offshoot to win big this year.

Succession, which follows the feuding family of a filthy rich media mogul as they attempt to take over his empire, took out seven Emmys including outstanding drama series.

HBO has won the prestigious award five times in the last six years.

Despite the absurdity of green screens and face masks, television’s night of nights seemed to go off without a hitch.

Tyler Perry took home the prestigious Governor’s Award, for forging a new path for people of colour in the television industry and for challenging Hollywood’s propensity to whitewash its content.

.@tylerperry accepts the Governors Award at the #Emmys, recounting a beautiful story of a quilt his grandmother gave him: “We are all sewing our own quilts…in my mother’s quilt, she couldn’t imagine me owning land that was once a Confederate Army base.” https://t.co/6ibY0IsH43 pic.twitter.com/mgCH6h1yx6

Oprah Winfrey, who co-presented the award with Chris Rock, said Perry is a “game changer who built a successful empire while ignoring every conventional norm”.

Like many Emmy winners this year, Perry’s poignant acceptance speech touched on the prominent Black Lives Matter movement, and encouraged viewers to vote in the upcoming election.

The election itself was a hot topic among presenters and nominees alike, with a topical sketch featuring ‘Derek the Russian mailman’ poking fun at Russian interference in the 2016 election and the current postal vote controversy.

Mark Ruffalo beat out our very own Hugh Jackman for lead actor in a limited series, (I Know This Much Is True) delivered an empowering acceptance speech about the challenges of living with disability and also urged citizens to vote in the upcoming election.

Okay but how cute is Mark Ruffalo’s wife watching him give his acceptance speech #Emmys pic.twitter.com/ujNWw83aUt

Taking note from the VMA’s earlier this month, the ceremony went without the creepy addition of fake crowds and canned laughter – but we did get a daggy video chat mishap.

Jesse Armstrong’s memorable ‘un-thank you speech’ for Succession, where he called out the coronavirus, Donald Trump and Nationalist governments for their poor handling of the pandemic, was interrupted by a mobile phone going off in the background.

See? Even Tinseltown’s most talented aren’t immune to the perils of Zoom.