"Going the extra mile" to give hope where it's needed most 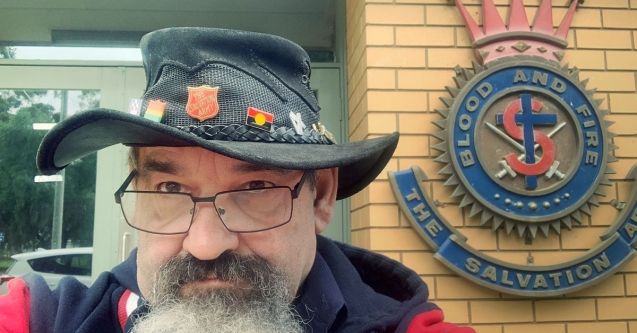 As a country Salvo, James is used to driving hundreds of kilometres most weeks, especially in the lead-up to Christmas, so he can bring hope to those struggling.

Salvos Corps Officer (minister) James Singer understands that Christmas can be a particularly difficult time for those who are struggling. His desire to bring hope, comfort and joy to those in need is strengthened by the hardship he has personally experienced and his faith in Jesus Christ.

In his region in Victoria, public transport is sporadic or non-existent, basically isolating those already in need. So one day James could be delivering food to someone isolated through poverty. Another day, he may be driving to give vouchers and other necessities to a person facing physical or mental health issues.

When asked why he also “goes the extra mile”, including at Christmas time, James says: “Christmas is such a special time and there are a lot of expectations. If you’ve got nothing, it is so devastating for the parents and for their kids.”

James understands this from firsthand experience. He grew up in poverty and remembers his own childhood.

“I grew up poor and I can still remember going back to school in February and kids saying, ‘Oh, I got a new bike for Christmas, and I got this and I got that’ and I’d turn around and say, ‘I got new school shoes’ (if I was lucky).

“I think things like that have stuck with me. Because I didn’t have a lot as a kid, I guess in my heart I will go that extra mile, so that kids from poverty, kids whose parents have nothing, will know that they are valued and they are worthy.

“If the parents can’t do it and we can (with support of our donors and volunteers) then why not go out of our way to give kids a great Christmas!”

Times are tough, but you can give kindness, joy and generosity this Christmas – find out how to volunteer.

James says years of drought have devastated many of the local towns and villages in his area. Not only are farmers affected, but also farm workers who have lost jobs and worker housing (on the farms).

The needs in the community range from spiritual pastoral care and church services to emotional, to very practical needs.

“It gets freezing here in winter, and we get really desperate calls from people who have no heating, they may be sick and need firewood,” James says.

“We had a lady last winter living rough* who’d lost her farm job and worker’s cottage. She had anxiety and other issues,” James shares.

“She’d been cut off by Centrelink because it is impossible to get mail or charge a phone when you are living rough in the bush.”

James says the Salvos helped her with warm bedding, including swag, food and then some temporary accommodation. She now has a stable job and a home.

“Care changes lives,” James says. “We never know how we impact people. We never know what little gesture might change a person’s life.”

The Salvos are here for you and to help you this Christmas. Find out more about our social and community programs, Christmas lunches and financial support.

Just before Christmas 2019, James received a message from a single dad who had driven his son to hospital many hours away, having to leave his other kids with neighbours.

Not able to bring his son home when expected, the dad had to drive all the way home to his other kids and then back to hospital a second time to pick up his son.

He rang the Salvos in a panic with barely enough money for fuel.

James says the most beautiful part of the story is that he wasn’t sure how the local Salvos would fund the fuel, but he simply said “yes”. On the way to buying the vouchers, James checked in at the post office. He opened a card containing a cheque from an anonymous donor, “To The Salvation Army for a family in need”.

“It was the same amount I’d decided to give the family for fuel,” he says with a smile.

James was also able to take the family food and helped with other needs, driving hundreds of kilometres backwards and forwards.

“Not long after, we rocked up to his place again with a food hamper and some toys for his kids. It was just great to be able to do that and it is totally worth the effort to make families feel valued and cared for at Christmas time.”

*Some details of stories have been changed to protect privacy.